Don’t worry – I’m not going to go all gushy here.  I like to save my mama related gushyness for when I’m a blubbering mess with my actual mama.

But, I thought since Mother’s Day is this Sunday, it would be irresponsible of me not to write about it in the old blog.  And yes, the easy way out would be to tell all of you why I am the luckiest and you are not.

I could go on and on about how my mom is the best mom and how she puts up with three of the very differently crazy kids in the world with grace and kindness and hugs – both virtual and in person.

Sure, she sometimes shakes her head of disbelief – probably from disbelief that she got so dang lucky to have such a unique handful.

You can see we haven’t affected her at all:

And for those of you constantly pointing to my dad as the source of my stunning personality…this is true proof that both parties were involved in my DNA.

Did you know that in some countries, Mother’s Day is celebrated in March?  So weird.  When I think of Mother’s Day I think of sunshine and flowers and feeling spring fever.  All things that make me feel that warm, fuzziness of contentment.  The same feeling I get when I think of my mom.  And, last I checked – none of those things are available in March.

Did you know that when Mother’s Day was being ‘invented’ back in 1908- the woman who named it (Anna Jarvis) was adamant that the apostrophe appeared between the ‘r’ and the ‘s’ instead of after the ‘s’?  She wanted to be sure this was a singular possessive so that each family would honor their mama – instead of making it just a general plural ‘yay for all the mothers’ type holiday.

She also decided the second Sunday in May was an ideal day for this – and when Woodrow Wilson made it an official holiday in 1914, he took her lead.

Some folks celebrate Mother’s Day on the fourth Sunday of Lent – this coming from another longstanding tradition where servants where given that day off to do their family Easter visiting – because they would surely need to be back to work on actual Easter.  Who else would cook the ham, boil, paint and hide the eggs and clean up after the Easter Bunny?

The day off became known as Mothering Sunday because the servants were theoretically going back to their ‘mother’ church.  Somewhere in time the two days merged into one.

If you look up the dates for Mother’s Day online (where everything is true) you’ll find that nearly every month – some country is celebrating Mother’s Day.  January, July and September seem to be the only months who don’t get to share the joy.

Still – I will always picture Mother’s Day as a May-thing.  I mean, really, Norway?  Second Sunday in February?  When it’s probably dark 23 hours of your day?

Are you spending more money than thought on your gifts?  Then you’re guilty.

Remember Anna Jarvis?  The Mother of Mother’s Day?  She burned through her life savings trying to de-commercialize the holiday.  Her whole purpose in the day was actually to fulfill her own mother’s dream of creating a celebration for all mothers.

Sadly, Jarvis came to regret the whole she-bang when she realized how Wanamakered the holiday was  becoming.

I actually like some of the ‘Hallmark-ness’ of the holiday.  Or most holidays for that matter.

I love walking into a Target or a drugstore or wherever- hitting the card aisle and seeing a crowd.

I love squishing in with all the other shoppers and going from card to card, chuckling, aw-ing and guffawing.

I love the dance everyone does around each other as we reach for cards – making sure no one is getting bumped or shoved, helping each other find a rejected card’s home back on the shelf, sometimes sharing cards with one another.

I love the feeling of ‘we’re all in this together’.

I love that the card I pick will be absolutely perfect for my mother and totally wrong for someone else’s.

I love that I could make my own card at home out of leftover scrap paper and my mama would think it was perfect.

Mainly, though – I just love my mama. 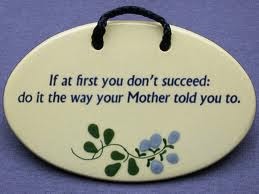 What to Expect When You Weren't Expecting has made it to the magic people who typeset and make book covers! Oh gosh, I hope they don't use Comic Sans!