As I like to tell my (rather dramatic) teenagers…never write your future in over-exasperated cement.

If you’d told me ten years ago that, in a decade, I’d be married with (going on) three beehives…well, I might have believed the beehives part, but that’s not really the point now, is it?

How did we get here? My husband kept saying no to chickens so we compromised and I got bees. He did not say yes to bees either, but again, that’s not really the point now, is it?

Am I already breaking a promise to not make it the source of bloggery? Yes.

I have twelve thousand flying insects, stingers included, less than 150 feet from my bedroom window, I do what I want now. Also, I know someone very special who does not have social anything who may not really believe that this leap is real, so here you go, Aunt Tonie…photo dump to follow.

I guess there were many pieces to this buzzle and they all sort of clicked into place at the same time. We had been in a battle for some adjacent acreage for several years and, during those years, we often joked about what we would raise on it. We thought goats (no), chickens (no), a single horse (no), corn (no)…but bees?

Bees never came up once actually.

During the same timespan, I came quite a long way from the panicked city girl who arrived in this very non-city town. I stopped darting from the car to the house, for instance, in fear of raccoon gangs and lost my need to vomit at the smell of skunk. Instead, I began to appreciate the beautiful area that surrounds our home, even dabbling a bit in gardening.

And by “dabbling” I mean I have killed so, so many plants. Yes, I know. Anybody can grow a tomato in Hanover County. Also, that is actually not true.

Also during the same span, a friend told us the hilarious tale of his failed beekeeping days. Though, now that I think about it, maybe the tale wasn’t hilarious to him, necessarily. Still, it ended with a very inspiring note of “you guys have the perfect yard for bees.”

So, last year, when the Virginia Department of Agriculture was offering free beehives to those who qualified as host homes, I signed up enthusiastically (Sort of. I signed up after that same storytelling friend asked me several times if I had signed up).

I was less enthusiastic when a random box of unmarked wood showed up six months later, especially when I realized the instructions were written for someone who knew what a “Top Bar Hive” actually looked like. With the help of Google, however, we soon had our very own Bee Hotel. Sure, I could have said Bee & Bee. But I didn’t.

My husband and I picked a spot out in the yard for the hive, I bought a book (Beekeeping for Dummies, what else) and read enough chapters (one) to determine that we would want Italian bees. I hopped on the interwebs and ordered a box of bees, to be picked up in late March. Easy peasy, right? Who knew? Evidently they let anybody do this shit!

…so, at 11:00 pm, we realized that the box of bees was, in fact, twelve thousand bees. Come again? And that we would be responsible for feeding them until they had their homestead organized. Come again, again? The list of surprises went on into the early hours of pick-up day poured through Beekeeping for Dummies, which we now understood was clearly named just for people like us.

It was tempting to skip pickup, change our phone number, and sell back that coveted acreage. Still, off we went, thinking that if our bee future looked truly terrifying, we could sidle away from the bee farm unnoticed.

We did not sidle out.

We brought home our bouncing three pound box of lady bees (including one large queen) and stared at them for a full hour while they rested from the car ride. We prepped the feeders that we’d created by doctoring chick waterers – perfect! – loading a quart of sugar syrup into the hive to greet them as a welcome gift to their new home.

And, finally, we donned out beekeeper gear, clipped the queen’s cage to her new throne, and followed it with all twelve thousand of her attendants. It sounds so smooth when summarized in one sentence. In reality, it was terrifying. But still, it was official. We were beekeepers. 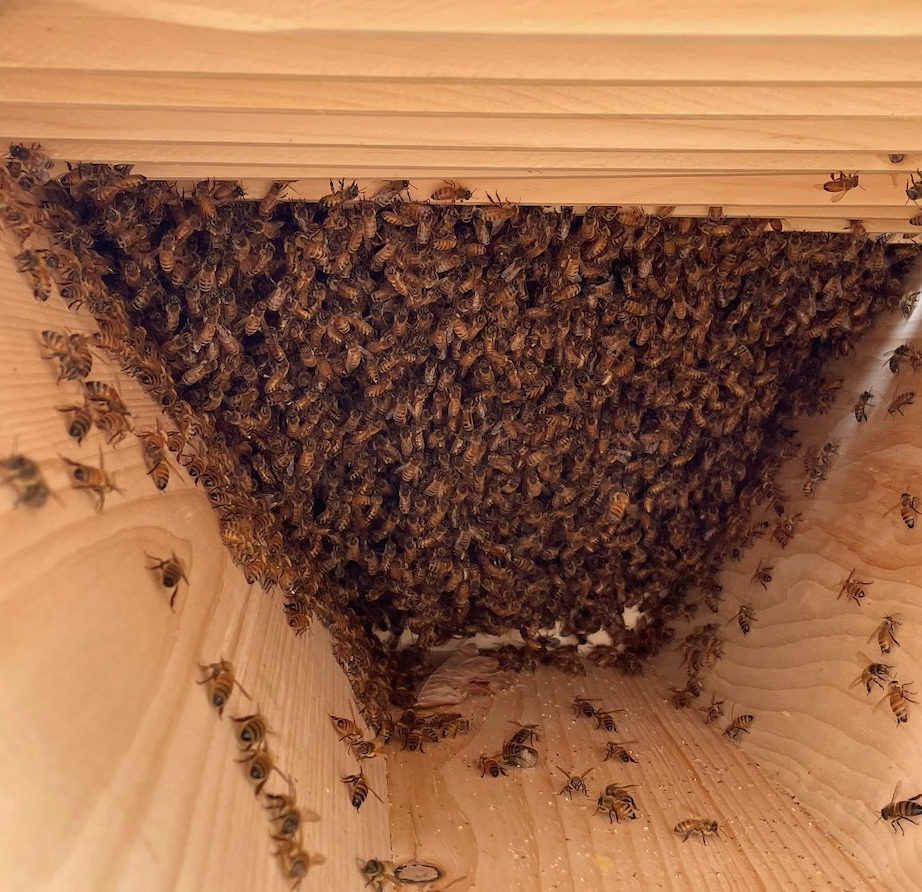 We were immediately obsessed.

When we’re lonely, we just stand at the kitchen window with our bee-noculars, checking on the hive. Most afternoons, it is exciting. However, if it is below sixty degrees, there will be minimal action. Also if it is windy or rainy or before 11:00am if there is too much noise or…I may have been a bee in a previous life. But, dang it, if it is a perfectly sunny day and, as soon as the temperature hits sixty-one, we are glued to the window to watch the door as the worker bees head out to do their pollen collection. Full disclosure: they do have to commute as our yard does not offer flowers (see gardening skills above).

It’s just that these bees are so stinking interesting! A single bee? Not so interesting, but put 12,000 of them together and every day is another fascinating lesson. The colony is run like a well organized machine with some members dedicated to raising new bees and some guarding their home and some collecting pollen and then there’s that whole Queen thing who gets to just hang out all day and lay eggs.

We have learned their moods, the changes in buzz tones, and what time of day is not a great time to just drop by for a visit, thank you very much.

We have learned that our own society could learn so much by just watching the daily magic of the hive.

No surprise then that we have intentions of picking up 24,000 more in the coming weeks.

Rich has been building two new hives (and has slipped a bit into engineer mode on the second, no surprise there). We have marked the calendar for pick-up day and have the feeders ready to go – now color-coded by hive so as not to cause sharing issues.

Yes, we may be obsessed.

What to Expect When You Weren't Expecting has been soft-launched! Click here (or under the "Buy My Book!" tab) to Buy, Love, and Review!

Wait, is this like a restaurant with a soft and hard opening? Yes, actually. Soft-launch enables friends/followers to buy first and load up reviews if they'd like.

Other Places I Write:

Jyl Barlow and Which Way’s Up are also on Facebook!

Jyl Barlow and Which Way’s Up are also on Facebook!